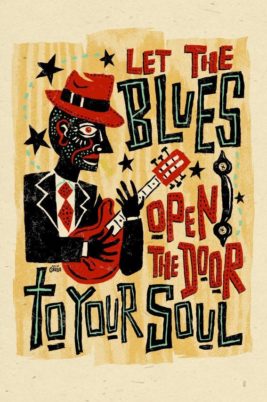 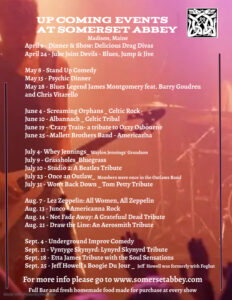 VenueOlde Mill Tavern
Address56 Main St, Harrison, ME 04040
Read more
Categories: Blues Gig Etc. Tags: Harrison
Jimmy Macisso Trio @ Frog & Turtle
Tickets
May 27 @ 7:00 PM – 9:00 PM
Contact
(207) 591-4185
Website
Facebook
VenueFrog & Turtle
Address3 Bridge St, Westbrook, ME 04092
Read more
Categories: Jazz Gig Tags: Westbrook
May
28
Fri
2021
D.W. Gill & Doug of The Blues Prophets $35 see notes @ Somerset Abbey Uptown Room
Tickets
May 28 @ 5:00 PM – 10:00 PM
Contact
(207) 696-5800
Website
Facebook
VenueSomerset Abbey Uptown Room
Address98 Main St.,Madison Maine 04950
NotesMemorial Day Weekend, Blues Legend James Montgomery will be taking the Somerset Abbey Summer Stage with his very special guest Barry Goudreau (formerly of the band Boston)! Maine's own Old Blues Kats, D.W and Doug from the band, Blues Phrophets will be warming up the stage for Mr. Montgomery. Gonna be a night full of Kick A$$ Blues! Full bar and great homemade small meals and appetizers available. This is a limited attendance show, so do not hesitate to order your tickets. Gates open at 5pm, The Old Blues Kats take the stage at 6pm and James Montgomery at 7pm. For James Montgomery his music career all started while growing up on the streets of Detroit, learning the Blues firsthand from James Cotton, John Lee Hooker and Jr. Wells. Montgomery is best known as the lead singer, blues harp player, front man and bandleader of The James Montgomery Blues Band (a.k.a. The James Montgomery Band). Montgomery collaborates with many star performers and recording artists, but we will get to that.. While attending Boston University, where he earned a degree in English literature, Mr. Montgomery started the James Montgomery Band. During his junior year, he was hired by the Colwell-Winfield Blues Band to play harmonica and tour with Janis Joplin. By the time he graduated from college his band was on the cover of the Boston Phoenix, heralded along with J. Geils and Aerosmith as the city's great contributions to the music world. Though he said he loved the academic life when offered a $15,000 job at BU, Mr. Montgomery took a $250,000 offer to record records and tour with the Allman Brothers instead, and never looked back." by Pamela Marean, Standard-Times correspondent, September 6, 2007 In 1970 Montgomery formed The James Montgomery Band. His harmonica playing, singing and energetic stage show led to his band gaining a reputation as one of the hottest bands on the New England music scene. Montgomery has toured with many artists, including Aerosmith, The J. Geils Band, Bonnie Raitt, Bruce Springsteen, The Allman Brothers, The Steve Miller Band, The Johnny Winter Band, The Blues Brothers with (Jim Belushi and Dan Aykroyd) and others. James Montgomery has performed on stage with a long list of musicians including B.B. King, Muddy Waters, Buddy Guy, John Lee Hooker, Junior Wells, James Cotton, Bonnie Raitt, Steven Tyler just to name a very few because the list IS LONG. Montgomery recalls the night he played with Muddy Waters at Paul's Mall in Boston, Massachusetts. "I couldn't believe it. Here I was on stage with Muddy Waters," Montgomery recalls with a smile. "It was such a great feeling." James had his own syndicated radio show for five years called "Backstage With the Blues" The show combined great Blues songs along with the stories behind the music, told by the musicians themselves, it provided a bridge between the listeners and the artists as they reminisced about the history of their music. Barry Goudreau’s first memories of music were of jumping around in his mother’s car to Roy Orbison and Elvis. By the time he was 11 he finally talked his parents into getting him guitar lessons and by 15 joined his first band with the future drummer of Boston, Sib Hashian. By High School, Barry had met Brad Delp while auditioning for his High School band and they played right through til college, where they decided to add a keyboardist. Tom Schultz applied and the rest is history. In ’79 while Boston was taking a break, Barry and Brad wrote a lot of music, a collaboration with some folks and released an album but with the inevitable comparisons with Boston, I came across to Tom that they were highlighting Barry causing some friction, by 1980, Tom wanted Barry out, so he moved on. Barry worked on another project, Orion the Hunter in ’85, they produced a record, but it did not have the same response as they had hoped. Once Brad Delp had left Boston Barry and Brad were back collaborating and writing together again and formed the band RTZ. They wrote and played together and put out another CD entitled Delp/Goudreau in 2003, the pair writing and playing together right until Brad’s tragic death in 2007. These days, Barry mostly focuses on his band Barry Goudreau’s Engine Room but we are lucky to have him on a side project for this show.
Read more
Categories: Blues Gig Tags: Madison
Matt & The Barnburners $5 Cover @ Big Sky Grill
Tickets
May 28 @ 5:00 PM – 7:00 PM
Contact
Website
Facebook
VenueBig Sky Grill
Address108 Narrow Gauge Square ,Farmington, ME 04938
Read more
Categories: Blues Gig Tags: Farmington
Dave Mello & Leo Lynch Duo @ Mé Lon Togo Bistro
Tickets
May 28 @ 6:00 PM – 9:00 PM
Contact
(207) 872-9146
Website

Read more
Categories: Blues Gig Etc. Tags: Barrington NH
Unfinished Blues Band $18-20 @ Cadenza
Tickets
May 29 @ 7:00 PM – 9:00 PM
Contact
Website
Facebook
VenueCadenza
Address5 Depot Street, Freeport, ME 04032
NotesAbout this event It all started back in the 20th century. It was the 1980s and hair metal bands ruled. The radio was jam packed with synthesized pop. Emerging hip-hop was all the rage. That's when three teenage buddies decided it was a good time to start an American, roots-rock, blues band. They loved Chuck Berry, Carl Perkins, Muddy Waters and B.B. King. Their classmates didn't know what to make of them but they boogied anyway. Calling themselves Unfinished Business, Rob Babson, Dean Clegg and Troy R. Bennett started rocking high school dances, barbecues, band battles and all-night parties around their high school in Maine. After graduation they kept on playing but not together. Fate had other plans for them. For the next 30 years, each followed different paths through parallel lives of professional music-making.Now, after a three-decade hiatus, they're back together as the Unfinished Blues Band because they're not done yet. They're still all about the basics: Swinging Drums, grooving bass lines and soulful guitar. Its all they need to make you dance, stomp and sing along. Babson's hands fly like lightning over his shining guitar strings. He wrings pathos and fury from its electrified, wooden body. Clegg, is the beating heart of the band. He hammers out tight rhythms on the drums with his brain and all four limbs. Bennett's fingers bring the bottom all the way to the top. His rumble-tumble bass lines never stop trucking. They all sing and you will, too. You wont be able to help yourself. Together, they've got nearly a hundred years of combined performing experience. As old friends, they're finding renewed energy in the music they make together. The spark is still alive and burning brighter than ever. Tickets are $18.00 in advance and $20.00 at the door. www.unfinishedbluesband.com
Read more
Categories: Blues Gig Tags: Freeport
Bess Jacques @ Grand Central Wine Bar
Tickets
May 29 @ 7:30 PM – 10:00 PM
VenueGrand Central Wine Bar
Address7 Railroad Ave., Gorham
Read more
Categories: Jazz Gig Tags: Gorham
May
30
Sun
2021
Gina Alibrio & Friends @ Portland Lobster Co.
Tickets
May 30 @ 12:30 PM – 3:30 PM
VenuePortland Lobster Co.
AddressPortland
Read more
Categories: Funk Gig Etc. Tags: Portland
Blues Jam hosted by Voodoo Clowns $5 Cover @ Tailgate Bar & Grill
Tickets
May 30 @ 1:00 PM – 5:00 PM
Contact
(207) 657-7973
Website
Facebook
VenueTailgate Bar & Grill
Address61 Portland Rd, Gray, ME 04039
NotesI'm told with warmer weather on the way, many Jams may be outside on the deck depending on the weather.